KLAYMAN: BRANDEL CHAMBLEE IS A DISHONEST HORSE'S ASS: SAUDI AND ARAB MONEY HAS ALSO DELUGED THE PGA AND DP WORLD TOURS! CHAMBLEE'S ANTI-COMPETITIVE DEFAMATION OF LIV AND ITS PLAYERS ON BEHALF OF NBC'S GOLF CHANNEL WILL BE DEALT WITH LEGALLY!
Order "It Takes a Counter-Revolution!" at Amazon.com
Donate and Support Freedom Watch at www.FreedomWatchUSA.org 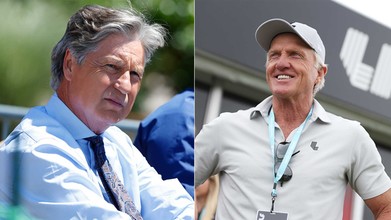 Chamblee, Golf Channel's lead analyst, has long been one of the most vocal critics of the new Saudi-backed league that continues to snatch players away from the PGA Tour and disrupt the pro game. Norman, the CEO of LIV Golf, has also been one of Chamblee's primary targets.

Last month, Chamblee said Norman and Phil Mickelson, one of the most prominent players to sign on for the league, should both be removed from the World Golf Hall of Fame. In an interview with The Palm Beach Post published last week, Norman was asked for his reaction to Chamblee's comments.