KLAYMAN: PERHAPS SAUDI PRINCE TOLD BIDEN HE BLAMES HIM FOR MURDERING 10 MUSLIM AFGHAN ALLIES IN A DRONE STRIKE! GO TO FREEDOMWATCHUSA.ORG AND READ ABOUT OUR CRIMINAL TRIAL OF BIDEN FOR NEGLIGENT HOMICIDE IN AFGHANISTAN AND BRIBERY FROM CHINA, RUSSIA AND UKRAINE! 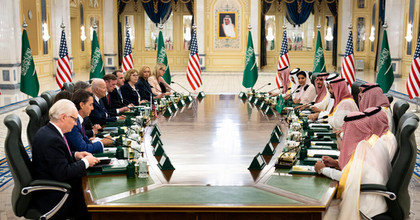 Biden Says He Told Saudi Prince He Blames Him for Khashoggi Murder
By Peter Baker
New York Times
July 16, 2022
President Biden said Friday night that he brought up the murder of Jamal Khashoggi during his closed-door meeting with Crown Prince Mohammed bin Salman and told the prince that he considered him to blame.

While Mr. Biden said nothing about Mr. Khashoggi during the public part of his meeting with the crown prince, he told reporters afterward that he considered the killing "outrageous" and directly confronted Prince Mohammed, who was judged responsible by the C.I.A. for the assassination carried out in Istanbul by a team of Saudi operatives in 2018.