KLAYMAN: AFTER TIGER'S COMMENTS ABOUT THE LIV TOUR PERHAPS NOW HE SHOULD THINK ABOUT JOINING IT!
Order "It Takes a Counter-Revolution!" at Amazon.com
Donate and Support Freedom Watch at www.FreedomWatchUSA.org 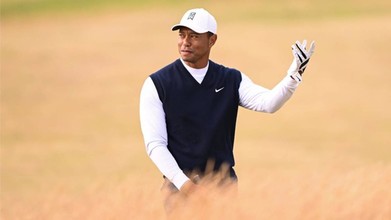 Tiger Woods score: Three-time Open champion ejects early, struggling in awaited return to St. Andrews
By Patrick McDonald
CBSSports.com
July 15, 2022
Playing one of his favorite events at his favorite course in the world, Tiger Woods showed considerable rust en route to an opening 6-over 78 in the 150th Open Championship on Thursday at St. Andrews. On the course for the first time since the third round of the PGA Championship in May, Woods' score across the 18 holes was the highest of his career as a professional, matching the 78 he shot at the Old Course as an amateur in the final round of the 1995 Open.

Catching a bad break off his first tee, the 15-time major winner's ball found a divot in the middle of the fairway on No. 1 and subsequently dumped his approach into the burn in front of the green -- just as he did in the first round of the 2015 Open at St. Andrews.

Unable to get up and down after taking a drop, Woods carded a double bogey. It did not get much better from there.