KLAYMAN: JOE BIDEN NOW SEEN AS AN "EXPENDABLE ZOMBIE" BY OVERWHELMING MAJORITY OF AMERICANS!
Order "It Takes a Counter-Revolution!" at Amazon.com
Donate and Support Freedom Watch at www.FreedomWatchUSA.org 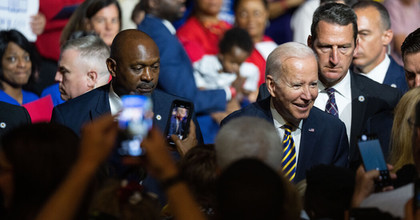 Most Democrats Don't Want Biden in 2024, New Poll Shows
By Shane Goldmacher
New York Times
July 11, 2022
President Biden is facing an alarming level of doubt from inside his own party, with 64 percent of Democratic voters saying they would prefer a new standard-bearer in the 2024 presidential campaign, according to a New York Times/Siena College poll, as voters nationwide have soured on his leadership, giving him a meager 33 percent job-approval rating.

Widespread concerns about the economy and inflation have helped turn the national mood decidedly dark, both on Mr. Biden and the trajectory of the nation. More than three-quarters of registered voters see the United States moving in the wrong direction, a pervasive sense of pessimism that spans every corner of the country, every age range and racial group, cities, suburbs and rural areas, as well as both political parties.

Only 13 percent of American voters said the nation was on the right track — the lowest point in Times polling since the depths of the financial crisis more than a decade ago.