KLAYMAN: THE QUID PRO QUO FOR THE BIDENS TAKING BRIBES FROM CHINA AND RUSSIA NOW EVEN MORE CLEAR! SEE WWW.FREEDOMWATCHUSA.ORG TO FOLLOW CRIMINAL PROSECUTION OF THE BIDENS!
Order "It Takes a Counter-Revolution!" at Amazon.com
Donate and Support Freedom Watch at www.FreedomWatchUSA.org 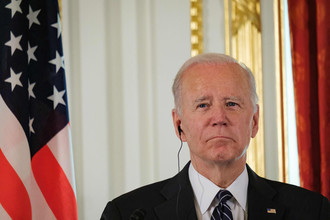 Joe Biden's oil gamble set to backfire as Saudi Arabia sticks with Russia
By Jack Dutton
Newsweek
July 11, 2022
Many countries in the West, including the U.S., want Saudi Arabia to produce more oil to help mitigate the growing global energy crisis that was ignited by the Ukraine war. More production will also punish Russia, a major oil exporter, by bringing global prices down.

According to a report in the Wall Street Journal on Sunday, U.S. officials said Biden will discuss Saudi Arabia's human rights record during the trip. The paper reported that Saudi officials are not likely to make any human rights concessions nor will they be willing to abandon an oil-production partnership with Russia.

Saudi Arabia has been looking to secure an oil alliance with Russia for decades but has to walk a tightrope to do this while improving strained relations with the U.S. over its human rights record.