HE CLAIMED POLICE LET HIM INTO THE CAPITOL. NOW KENTUCKY MAN GOING TO JAIL FOR JAN. 6 RIOT
Order "It Takes a Counter-Revolution!" at Amazon.com
Donate and Support Freedom Watch at www.FreedomWatchUSA.org 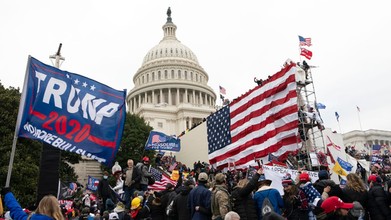 Louisville Courier Journal
July 11, 2022
LOUISVILLE, Ky. — A Western Kentucky man who claimed a police officer "let us in" to the U.S. Capitol building during the deadly Jan. 6, 2021, riot in Washington, D.C., was sentenced Thursday to 14 days in jail.

U.S. District Judge James E. Boasberg ordered Jordan Revlett, of Island, Kentucky, to also serve one year of supervised probation and 80 hours of community service as well as pay $500 in restitution and not possess firearms while on probation.

Revlett, 23, had pleaded guilty in January to a count of parading, demonstrating or picketing in a Capitol building, a Class B misdemeanor punishable by up to six months in prison and a maximum $5,000 fine.