KLAYMAN: NBC'S GOLF CHANNEL IS TRASHING LIV & ITS PLAYERS BECAUSE IT FEARS ANOTHER NETWORK WILL ACQUIRE RIGHTS TO BROADCAST LIV AND BECOME A COMPETITOR! NBC'S GOLF CHANNEL MAY BE ILLEGALLY COLLUDING IN RESTRAINT OF TRADE WITH THE PGA AND DP GOLF TOURS!
Order "It Takes a Counter-Revolution!" at Amazon.com
Donate and Support Freedom Watch at www.FreedomWatchUSA.org 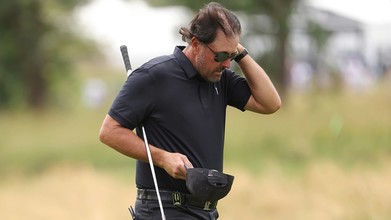 Poston, who won the John Deere Classic on Sunday, rose from No. 99 to inside of the top 60, at No. 58. Should he remain there through next year's U.S. Open cutoff, he would earn an automatic spot at Los Angeles Country Club. He is already into next week's Open Championship, as well as next year's Masters and PGA Championship.

On the other hand, all but two of the 38 players who have played each of the first two LIV Golf events have suffered slides in the rankings since the June 5 update, which happened the week before the LIV opener in London.