KLAYMAN: FLORIDIANS HAVE BETTER SENSE THAN TO MOVE TO WHAT PRETTY BOY NEWSOM HAS TURNED INTO FREAKISH STATE!
Order "It Takes a Counter-Revolution!" at Amazon.com
Donate and Support Freedom Watch at www.FreedomWatchUSA.org 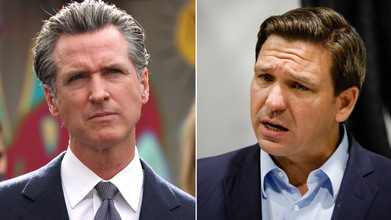 "Your Republican leaders, they're banning books," Newsom says in the ad as images of DeSantis play on the screen. The California Democrat goes on to say Republican governors are also "making it harder to vote, restricting speech in classrooms, even criminalizing women and doctors."

Newsom appeared to be referencing a DeSantis move to reject 41% of the state's math books over concerns that the books used material that included themes of social-emotional learning, Common Core standards and critical race theory, which are all banned under Florida law.