KLAYMAN: COMMUNIST POPE FRANCIS IS A DISGRACE TO THE CATHOLIC RELIGION & HAS DISRESPECTED THE FATHER & SON: COMMUNION FOR BABY KILLERS & ABORTIONISTS LIKE BIDEN AND PELOSI BUT NOT FOR CHRISTIANS OF OTHER DENOMINATIONS WHO HAVE BEEN BAPTIZED & ARE PRO-LIFE! HE SHOULD BE REMOVED AS POPE!
Order "It Takes a Counter-Revolution!" at Amazon.com
Donate and Support Freedom Watch at www.FreedomWatchUSA.org 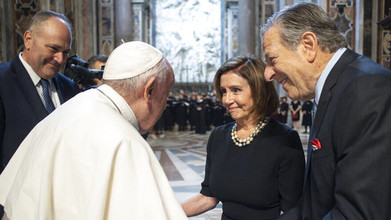 Pelosi receives Communion in the Vatican, despite her home archbishop refusing it
NPR.org
June 30, 2022
ROME — U.S. House Speaker Nancy Pelosi met with Pope Francis on Wednesday and received Communion during a papal Mass in St. Peter's Basilica, witnesses said, despite her position in support of abortion rights.

Pelosi attended the morning Mass marking the feasts of St. Peter and St. Paul, during which Francis bestowed the woolen pallium stole on newly consecrated archbishops. She was seated in a VIP diplomatic section of the basilica and received Communion along with the rest of the congregants, according to two people who witnessed the moment.