KLAYMAN: GAY AND LESBIAN MARRIAGE NEXT TO GO AS A CONSTITUTIONAL RIGHT! MORE IMPORTANTLY AN AFFRONT TO GOD!
Order "It Takes a Counter-Revolution!" at Amazon.com
Donate and Support Freedom Watch at www.FreedomWatchUSA.org 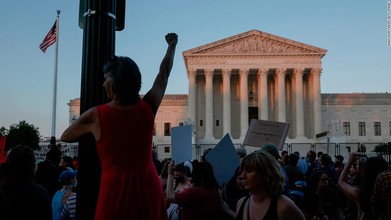 A 59% majority of US adults disapprove, with 41% approving. About half (52%) call the decision a step backward for America, with 31% calling it a step forward and 17% saying it's neither.

Among women, two-thirds (67%) disapprove of the ruling, with just 33% approving. A 56% majority of women say that the decision will make the lives of most American women worse.