KLAYMAN: CHIEF JUSTICE ROBERTS DID NOT LOSE A COURT THAT WAS EVER HIS: ROBERTS IS A DISHONEST "CLOSET LEFTIST" AND IS INTELLECTUALLY AND ACTUALLY DISHONEST!
Order "It Takes a Counter-Revolution!" at Amazon.com
Donate and Support Freedom Watch at www.FreedomWatchUSA.org 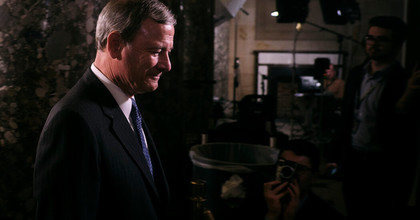 He had worked for seven months to persuade his colleagues to join him in merely chipping away at Roe v. Wade, the 1973 decision that established a constitutional right to abortion. But he was outflanked by the five justices to his right, who instead reduced Roe to rubble.

In the process, they humiliated the nominal leader of the court and rejected major elements of his jurisprudence.