KLAYMAN: ANSWER: SEAN PENN IS A CASTRO LOVING COMMUNIST!
Order "It Takes a Counter-Revolution!" at Amazon.com
Donate and Support Freedom Watch at www.FreedomWatchUSA.org 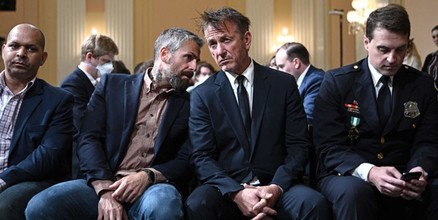 Why the Hell Was Sean Penn at the January 6 Hearings on Thursday?
Esquire
June 25, 2022
Sean Penn made an unexpected appearance at Thursday's hearing of the House Select Committee investigating the attack on the Capitol on January 6. Penn did not testify. He sat in the audience between D.C. Metropolitan Police officers Michael Fanone and Daniel Hodges, both of whom responded to the attacks.

CNN's Annie Grayer asked Penn why he was at the hearing. "I'm just here to observe—just another citizen," he said. "I think we all saw what happened on January 6 and now we're looking to see if justice comes on the other side of it."

Sean Penn next to Officer Michael Fanone of the Washington, D.C., Metropolitan Police Department, at the House Select Committee hearing to Investigate the January 6th Attack on the U.S. Capitol.