KLAYMAN: BILL BARR IS A TYPICAL WORTHLESS REPUBLICAN ESTABLISHMENT POLITICAL HACK WHO IS TRYING TO SAVE HIS OWN SKIN AND ALSO KEEP HIS MEMBERSHIP CARD TO THE CORRUPT D.C. SWAMP!
Order "It Takes a Counter-Revolution!" at Amazon.com
Donate and Support Freedom Watch at www.FreedomWatchUSA.org 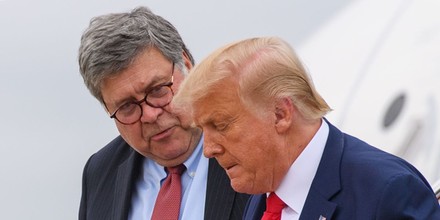 In a closed-door deposition, Barr suggested to the House committee investigating the January 6, 2021, attack on the US Capitol that Trump might not have left office voluntarily if DOJ had not proactively examined the election fraud claims ahead of Joe Biden's inauguration.

"I sort of shudder to think what the situation would have been if the position of the department was: We're not even going to look at this until after Biden's in office," Barr said in the recorded deposition, a portion of which the committee aired Thursday at a hearing focused on Trump's effort to pressure the Justice Department to advance his false election fraud claims.