KLAYMAN: THE "IRRATIONAL" AND ARROGANT MONAHAN IS A THREAT TO FREE MARKET COMPETITION AND HE AND THE PGA TOUR ARE LIKELY TO BE SUED!
Order "It Takes a Counter-Revolution!" at Amazon.com
Donate and Support Freedom Watch at www.FreedomWatchUSA.org 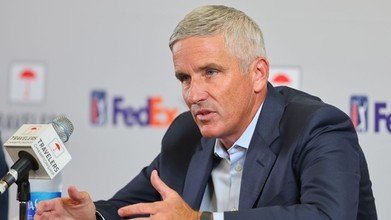 Tour commish: LIV is an 'irrational threat' to golf
ESPN.com
June 24, 2022
If there was any doubt about the venom brewing between the PGA Tour and the rival LIV Golf Invitational Series, the latest salvo was delivered by the breakaway circuit on Wednesday.

"As I also said to the players [on Tuesday], let me be clear: I am not naive," Monahan said during a news conference at the Travelers Championship in Cromwell, Connecticut. "If this is an arms race and if the only weapons here are dollar bills, the PGA Tour can't compete. The PGA Tour, an American institution, can't compete with a foreign monarchy that is spending billions of dollars in an attempt to buy the game of golf.