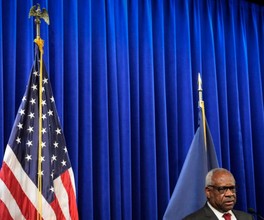 In agreeing with the majority that there was "no constitutional right to abortion" and that "the purported right to abortion is not a form of 'liberty' protected by the Due Process Clause," Thomas wrote, "to emphasize a second, more fundamental reason why there is no abortion guarantee lurking" in the 14th Amendment.