KLAYMAN: IF THESE RABID DEMS AND LIZ CHENEY WANT TO PROTECT DEMOCRACY THEN IMPEACH, CONVICT OR OTHERWISE FORCE BIDEN TO RESIGN BEFORE THIS CRIMINAL BRAINDEAD STUPID MORON TOTALLY DESTROYS THE NATION!
Order "It Takes a Counter-Revolution!" at Amazon.com
Donate and Support Freedom Watch at www.FreedomWatchUSA.org 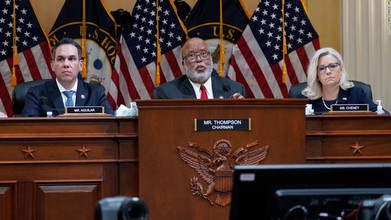 Jan. 6 hearings day 3
By Meg Wagner
CNN
June 17, 2022
The House select committee investigating the Capitol insurrection on Thursday detailed how former President Donald Trump tried to pressure his vice president to join in his scheme to overturn the presidential election — and how Pence's refusal put his life in danger as rioters called for Pence's hanging on Jan. 6, 2021.

Two witnesses testified during Thursday's hearing who advised Pence that he did not have the authority to subvert the election: former Pence attorney Greg Jacob and retired Republican judge J. Michael Luttig.