KLAYMAN: HYPOCRITES: ARAB MUSLIM MONEY HAS ALREADY CORRUPTED THE PGA-EUROPEAN AND AFFILIATED TOURS! "THE RACE TO DUBAI" JUST ONE EXAMPLE! TOO LATE TO SHED CROCODILE TEARS!
Order "It Takes a Counter-Revolution!" at Amazon.com
Donate and Support Freedom Watch at www.FreedomWatchUSA.org 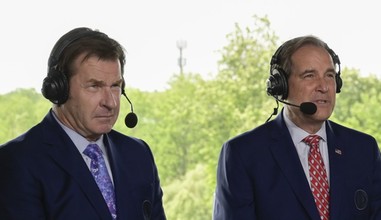 Nick Faldo And Jim Nantz Slam LIV Golf Series
By Matt Cradock
Golf Monthly Magazine
June 12, 2022
In the build-up, and conclusion, of the first LIV Golf Invitational Series event at the Centurion Club, many influential figures have given their thoughts and opinions on the new Saudi-backed series.

On Saturday evening at the RBC Canadian Open, six-time Major winner Nick Faldo, and his CBS colleague, Jim Nantz, gave their thoughts on the LIV Golf Series, with both men slamming the set-up of the 54-hole format, as well as those players who have jumped ship to pursue the larger purses.