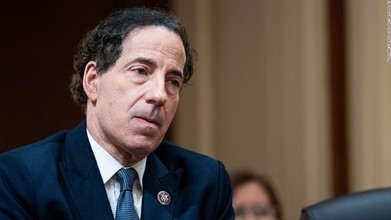 Raskin says Garland knows 'what's at stake' on possible Justice Department indictment of Trump
By Daniella Diaz
CNN
June 12, 2022
(CNN)Rep. Jamie Raskin, a Democrat who is on the House select committee investigating the attack on the US Capitol on January 6, 2021, said Sunday he believes Attorney General Merrick Garland knows "what's at stake here" when it comes to a possible indictment of former President Donald Trump from the Department of Justice.

"One of the conventions that was crushed during the Trump administration was respect by politicians for the independence of the law enforcement function," the Maryland Democrat told CNN's Dana Bash on "State of the Union." "Attorney General Garland is my constituent, and I don't browbeat my constituents. I think that he knows, his staff knows, US attorneys know, what's at stake here. They know the importance of it, but I think they are rightfully paying close attention to precedent in history as well as the facts of this case."

Raskin's comments came after the committee's first public hearing on Thursday -- the first in a series this month that will highlight the findings of the panel's investigation, which included interviews with more than 1,000 people about how Trump and his team tried to overturn the results of the 2020 election on multiple fronts.