KLAYMAN: HAVING DESTROYED THE NATION AND THE LEFT'S AGENDA IN JUST A YEAR AND ONE HALF EVEN CNN THE "COMMUNIST NEWS NETWORK" HAS TURNED ON BIDEN AS A BRAINDEAD, FEEBLE, STUPID LOSER!
Order "It Takes a Counter-Revolution!" at Amazon.com
Donate and Support Freedom Watch at www.FreedomWatchUSA.org 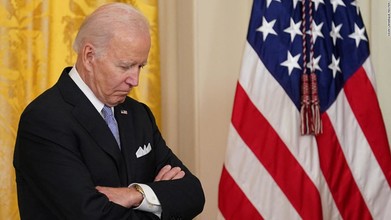 An analysis of Gallup's polling on Biden's job approval ratings since his January 2021 inauguration reveals that the President's middling numbers are remarkably consistent over the past year.

The last time that Biden had the approval of a majority of the American public in a Gallup survey was in July 2021 (Biden's approval was right at 50%). The last time Biden's job approval rating was higher than 45% in Gallup's polling was August 2021, when it stood at 49%.