KLAYMAN: BIG MISTAKE: MCCARTHY IS A DISHONEST MORONIC ESTABLISHMENT REPUBLICAN WHO ALREADY STABBED TRUMP IN THE BACK: SEEMS THE DONALD HAS NOT LEARNED HIS LESSON!
Order "It Takes a Counter-Revolution!" at Amazon.com
Donate and Support Freedom Watch at www.FreedomWatchUSA.org 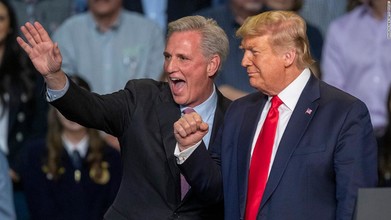 The endorsement comes nearly two months after the release of tapes featuring McCarthy privately bashing Trump in the immediate aftermath of the January 6 attack on the US Capitol. The two have maintained a good relationship since that controversy first broke.

It also comes as McCarthy is expected to lead congressional Republicans' targeted response to the public hearings by the House select committee investigating January 6, which start this week. CNN previously reported that Trump is seeking cover from his allies during the hearings.