KLAYMAN: PACK IT IN JOHN: YOU AND YOUR LAZY & INCOMPETENT LEGAL TEAM JUST LET HILLARY OFF SCOT FREE AGAIN!
Order "It Takes a Counter-Revolution!" at Amazon.com
Donate and Support Freedom Watch at www.FreedomWatchUSA.org 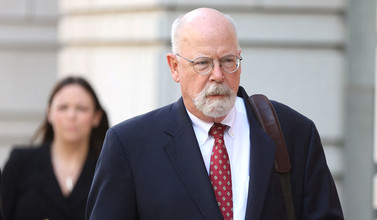 Durham's Work Must Go On, despite Sussmann Acquittal | National Review
National Review
June 1, 2022
The usual suspects are taking the acquittal of Democratic lawyer Michael Sussmann as proof that Special Counsel John Durham never had a real case to investigate. Instead, it should put a spotlight on what really needs investigating: the FBI's role in the Trump—Russia "collusion" farce.

In the case that Durham unwisely brought, the FBI played the part of the victim. And there is no serious question that Sussmann lied to it. He conveyed an allegation that Donald Trump, at the time the Republican presidential candidate, had established a communications back channel with the Kremlin through servers at Russia's Alfa Bank.