CLINTON CAMPAIGN LAWYER ACQUITTED OF LYING TO THE FBI
Order "It Takes a Counter-Revolution!" at Amazon.com
Donate and Support Freedom Watch at www.FreedomWatchUSA.org 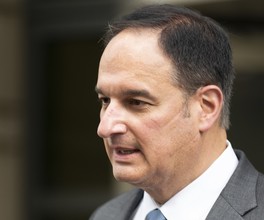 Newsmax
May 31, 2022
A lawyer for Hillary Clinton's 2016 presidential campaign was acquitted Tuesday of lying to the FBI when he pushed information meant to cast suspicions on Donald Trump and Russia in the run-up to the 2016 election.

The case against Michael Sussmann was the first courtroom test of special counsel John Durham since his appointment three years ago to search for government misconduct during the investigation into potential ties between Russia and Trump's 2016 campaign. The verdict represents a setback for Durham's work, especially since Trump supporters had looked to the probe to expose what they contend was egregious bias by law enforcement officials who investigated the former president.