KLAYMAN: DURHAM IS A COWARD: SCARED TO INDICT & TRY HILLARY CLINTON! WE WILL!
Order "It Takes a Counter-Revolution!" at Amazon.com
Donate and Support Freedom Watch at www.FreedomWatchUSA.org 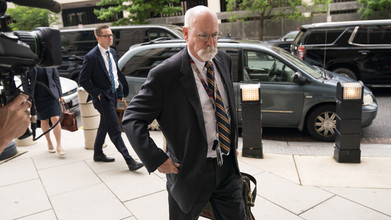 As a jury weighs if a lawyer lied to the FBI, Durham's legacy hangs in the balance
NPR.org
May 29, 2022
Jurors will return to the federal courthouse in Washington, D.C., on Tuesday to deliberate the fate of lawyer Michael Sussmann — and the legacy of the man prosecuting him, Justice Department special counsel John Durham.

Sussmann stands accused of lying to the FBI about whether he was working on behalf of a client with Democratic political interests when he brought the bureau allegations about questionable links between a Russian bank and the Trump Organization shortly before the election in 2016. Prosecutors said Sussmann wanted to use the FBI and major news outlets to deliver an October surprise that would hand the White House to Hillary Clinton, who was running against former President Donald Trump in that election.