KLAYMAN: FEDERAL JUDGE COOPER, A DISHONEST OBAMA APPOINTEE, WILL TAINT THE JURY AND SUSSMANN WILL BE WRONGLY ACQUITTED: MARK MY WORDS AND PREDICTION!
Order "It Takes a Counter-Revolution!" at Amazon.com
Donate and Support Freedom Watch at www.FreedomWatchUSA.org 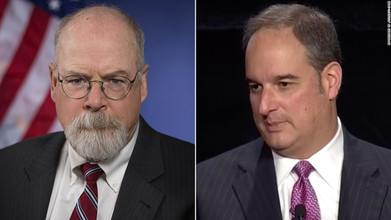 Sussmann has pleaded not guilty to one count of lying to the FBI during a September 2016 meeting, where he passed along a tip about a potential communications backchannel between Donald Trump and a Kremlin-linked bank. He isn't accused of inventing the tip, which the FBI later dismissed, but he was charged with lying about whether he brought the tip on Clinton's behalf.

Sixteen witnesses testified as part of Durham's seven-day case. Sussmann's lawyers began their case Wednesday afternoon, and they haven't ruled out that Sussmann might testify in his own defense. If Sussmann does take the stand, it will happen Thursday, his lawyer said.