KLAYMAN: CHIEF JUSTICE ROBERTS LIVES IN MORE THAN JUST A LEFTIST CLOSET: DISHONEST TO THE CORE!
Order "It Takes a Counter-Revolution!" at Amazon.com
Donate and Support Freedom Watch at www.FreedomWatchUSA.org 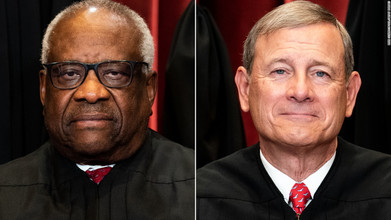 Roberts announced that 30 years ago on that exact date, a ceremonial investiture for Thomas had been held. Thomas, sitting to Roberts' right, beamed and slung his arm over the chief's shoulder.

That collegiality in the courtroom, filled with only a few dozen spectators because of Covid-19 protocols, has vanished. The two justices are now engaged in an epic struggle over a new abortion case that could mean the end of Roe v. Wade nationwide and unsettle the public image of the court.