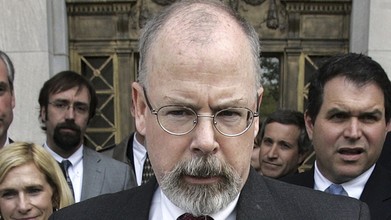 Trump-era special counsel faces first real test as Washington attorney goes on trial
NPR.org
May 16, 2022
A Washington attorney with ties to the Democratic party goes on trial Monday for allegedly lying to the FBI weeks ahead of the 2016 election, in the first case from Trump-era special counsel John Durham to be heard by a jury.

Michael Sussmann faces a single count of making false statements to the FBI in a September 2016 meeting with the bureau's general counsel about potential ties between a Kremlin-tied bank and a computer server at the Trump Organization.