JOE, HUNTER, JAMES BIDEN AND ANTHONY FAUCI INDICTED AND ARRAIGNED FOR ALLEGED CRIMES OF BRIBERY, NEGLIGENT HOMICIDE AND OTHER ALLEGED OFFENSES
Trials on May 10th, 11th, and 12th, 2022

(Washington, D.C., May 4, 2022). Today, the founder of both Judicial Watch, Inc. and Freedom Watch, Inc., a former federal prosecutor of the U.S. Department of Justice, and the current chairman and general counsel of Freedom Watch, and the citizens' prosecutor with regard to citizens grand jury indictments returned against Joe, Hunter and James Biden, as well as Anthony Fauci, announced that these defendants were arraigned yesterday before a citizens judge. The indictments and Zoom video of the arraignment are embedded below.

Having predictably failed to appear for their arraignment, as the defendants apparently have no respect for the rights of We the People, the citizens judge entered not guilty pleas on their behalf.

The Bidens and Fauci will now be tried before a jury of their peers in a citizens trial on May 10, 11 and 12, 2022, convictions will be sought and if convictions are obtained each defendant will be sentenced. Following any convictions, as set forth during the arraignments, once sentenced, the citizens prosecutor and the Court will ask established law enforcement and/or the U.S. military to carry out the imposed sentences. The trial of the Bidens and Fauci will be videoed and made available for the public to view.

Larry Klayman, the citizens prosecutor, had this to say after the arraignment:

"The U.S. legal system, having been corrupted by both Democrats and Republicans, who protect the self-styled higher ups and elites by not holding anyone accountable, and their "yes men and women" on the federal bench in particular, needs to be taken back by We the People. There must be one justice system, not the dual one now in effect; one for the so called privileged few and one for us ordinary citizens.

"As explained at the arraignment, and in my new book "It Takes a Counter-Revolution: Wake Up America!", available at www.freedomwatchusa.org and on sale at all major on-line booksellers such as Amazon.com and BarnesandNoble.com, the right of We the People to enforce not just manmade laws, but the laws of nature and nature's God, as set forth in our Declaration of Independence, is sacrosanct. And, when the rulers of the nation refuse or fail to carry out their duties to protect the citizenry from corruption and other forms of criminal behavior, it is the God-given right of the citizenry to carry and mete out the law themselves. By way of example, this occurred in the West in particular during the era of Wyatt Earp and others who sought to return order to our nation.

"If our country is to survive these dire lawless times, the moment has come again for We the People to rise up, unafraid of retribution from the compromised and corrupt establishment — who have no legitimacy in any event -- and take matters into our own peaceful and legal hands."

For more information about our citizens grand juries and trials, go to www.freedomwatchusa.org. You may also contact Larry Klayman at leklayman@gmail.com or call 424-335-5646 to be in contact with his executive assistant 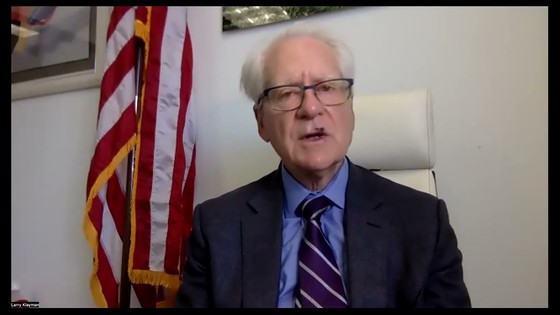