KLAYMAN: ZELENSKY IS RIGHT: COWARDLY AND HYPOCRITICAL ISRAELI PM IS WRONG!
Order "It Takes a Counter-Revolution!" at Amazon.com
Donate and Support Freedom Watch at www.FreedomWatchUSA.org 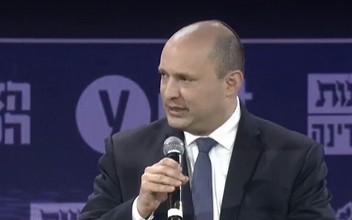 Bennett empathizes with Zelensky, rejects Holocaust parallel, says mediation ongoing
Times of Israel
May 2, 2022
Prime Minister Naftali Bennett on Monday responded with a mixture of empathy and criticism to Volodymyr Zelensky's caustic address to Israeli lawmakers on Sunday, during which the Ukrainian president repeatedly invoked the Holocaust.

Bennett said that he believes the Holocaust should not be compared to anything, but also that he understands the Ukrainian people's suffering.

"He's a leader battling for the life of his country," Bennett said, speaking at a conference organized by the Ynet news site. "Many hundreds of dead, millions of refugees. I cannot imagine what it is like to be in his shoes.