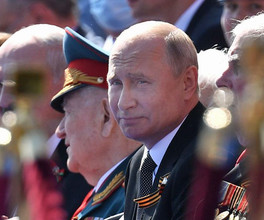 Report: Putin Will 'Declare War' on Ukraine
By Nicole Wells
Newsmax
April 29, 2022
Russian President Vladimir Putin will likely use the May 9 Victory Day celebrations, which mark the surrender of Nazi Germany in 1945, to inform the Russian people that he is waging a war in Ukraine, not running a special military operation, the U.K.'s defense minister said.

As the Kremlin's assault on Ukraine moved into its 10th week on Thursday, Putin has not yet labeled it a war, but has instead maintained that it is a "special military operation," the goal of which is the "denazification" of the former Soviet Union country.

British Defense Secretary Ben Wallace said the Russian head of state will have to tell the Russian people about the reality of the conflict if he needs more conscripts to be compelled to join the ranks under a formal declaration of hostilities.