KLAYMAN: THE BRAINDEAD, STUPID, BRIBED, CRIMINAL JOE BIDEN IS NOT LUCID ENOUGH AND HAS NO STANDING TO ATTACK ANYONE!
Order "It Takes a Counter-Revolution!" at Amazon.com
Donate and Support Freedom Watch at www.FreedomWatchUSA.org 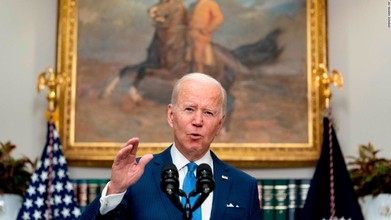 A frustrated Biden will go on attack against GOP in midterms -- and into 2024
By Edward-Isaac Dovere and Kevin Liptak
CNN
April 29, 2022
(CNN)President Joe Biden has been letting loose in private conversations in recent weeks, railing about the factors bogging down his approval ratings and the people he thinks aren't helping -- including Democrats eyeing his job despite his clear promise to run for reelection.

He's gearing up for intense midterm campaigning built around hammering Republicans, as he tries to save Democrats in the House and Senate, but also to tee up a reelection campaign that for now is expected to be announced by next spring.