KLAYMAN: KEVIN MCCARTHY IS A RINO MORON ALMOST AS STUPID AS BIDEN: HE IS UNFIT TO BE SPEAKER OF THE HOUSE OR EVEN REPUBLICAN MINORITY LEADER!
Order "It Takes a Counter-Revolution!" at Amazon.com
Donate and Support Freedom Watch at www.FreedomWatchUSA.org 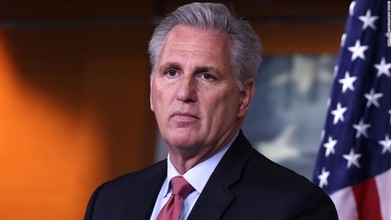 McCarthy quietly moves to tamp down fallout after damaging audio
By Melanie Zanona, Manu Raju and Lauren Fox
CNN
April 22, 2022
(CNN)House Minority Leader Kevin McCarthy has been maneuvering behind the scenes to contain the fallout over damning and contradictory conversations he had with other GOP lawmakers about then-President Donald Trump in the immediate aftermath of January 6.

The California Republican dialed up key GOP members throughout Friday and spoke to Trump by phone Thursday night, according to multiple Republicans. And he has so far managed to calm nerves inside the House GOP Conference and prevent a public revolt from his right flank, who could jeopardize his path to the speakership if Republicans win the House -- depending on the size of their potential majority that his closest advisers are trying to expand to avoid any problems.

McCarthy is expected to address his conference on the matter when Republicans meet privately next Wednesday, hoping to move past a controversy that revealed his privately held views of Trump soon after the January 6, 2021, attack, comments that he initially denied making only to have secret recordings flatly contradict his public assertions.