A MAN BOASTED ABOUT JAN. 6 TO HIS UBER DRIVER, FEDS SAY. HE'S NOW CHARGED.
Order "It Takes a Counter-Revolution!" at Amazon.com
Donate and Support Freedom Watch at www.FreedomWatchUSA.org 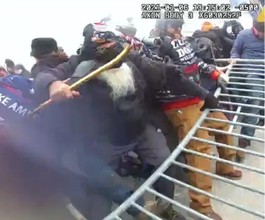 Washington Post
April 20, 2022
When night fell on Jan. 6, 2021, Jerry Braun grabbed a slice of pizza while waiting for his Uber ride. Hours before, he had stormed the Capitol and even whacked a reporter with a wooden plank, prosecutors allege.

A driver picked him up in downtown Washington about 7 p.m., immediately noticing a bleeding wound near Braun's eye. In an exchange that was caught by a camera mounted inside the car, the driver asked the white-bearded man: "So, has it been violent all day?"

"Well, it started around, right when I got there," Braun responded, according to court records. "I tore down the barricades."