KLAYMAN: TYPICAL REPUBLICAN TALK AND NO ACTION!
Order "It Takes a Counter-Revolution!" at Amazon.com
Donate and Support Freedom Watch at www.FreedomWatchUSA.org 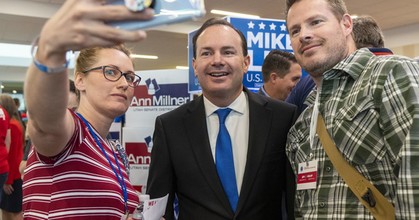 Sen. Mike Lee says AT&T's decision to drop far-right One America News threatens American journalism
The Salt Lake Tribune
April 19, 2022
Sen. Mike Lee says he is worried about the future of journalism in America. That's why he's very concerned about AT&T's decision to boot far-right channel One America News Network off its lineup and wants to know if the move was the result of a partisan decision.

AT&T's decision comes after AT&T subsidiary DirecTV decided not to renew its contract with the ultraconservative OAN earlier this year. The network alleges the move was part of a "political scheme" to put the channel out of business. Reuters reported 90% of OAN's operating revenue comes from DirecTV.

Lee and Texas Sen. Ted Cruz sent a letter to the AT&T Board of Directors expressing "grave concern" about the state of the media and political discourse in America, demanding to know if politics played a role in ending the contract with OAN, according to a tweet from Ron Filipkowski.