KLAYMAN: PRAYER BUT ACTION NOW FOR UKRAINE: COMMUNIST POPE FRANCIS IS NO JOHN PAUL II!
Order "It Takes a Counter-Revolution!" at Amazon.com
Donate and Support Freedom Watch at www.FreedomWatchUSA.org 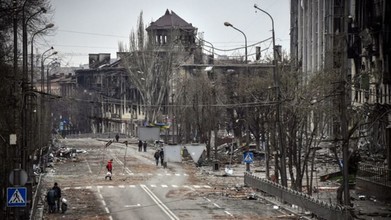 Ukrainian marine commander urges Pope Francis to help save Mariupol: 'Prayers are not enough'
The Week
April 18, 2022
The Ukrainian marine unit commander in city of Mariupol, currently under siege by Russian forces, has penned a letter to Pope Francis in which he urges the religious leader to help save those still in the city, CNN reports, per online newspaper Ukrainska Pravda.

Maj. Serhi Volyna, commander of the 36th Separate Marine Brigade, began his letter to the Pope by noting he is Orthodox, not Catholic, but "I believe in God and I know that light always overcomes darkness."