KLAYMAN: DE SANTIS NOT TRUMP IS THE LIKELY CANDIDATE FOR PRESIDENT IN 2024! BUT THIS WILL BE TOO LATE AS BIDEN AND LEFT WILL HAVE TOTALLY DESTROYED THE NATION BY THEN!
Order "It Takes a Counter-Revolution!" at Amazon.com
Donate and Support Freedom Watch at www.FreedomWatchUSA.org 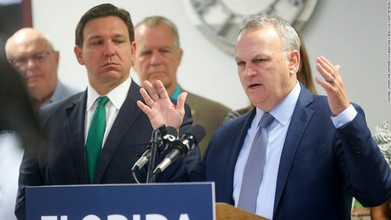 In a news release, the department stated 54 out of 132 of the textbook submissions would not be added to the state's adopted list because they did not adhere to Florida's new standards or contained prohibited topics.

The release said the list of rejected books makes up approximately 41% of submissions, which is the most in Florida's history.