KLAYMAN: MCCARTHY IS ALMOST AS DUMB AS BIDEN: HE IS A REPUBLICAN ESTABLISHMENT CLOWNISH BUT DANGEROUS HACK! WHY DIDN'T MCCARTHY RAISE ALARM BELLS AT THE TIME!
Order "It Takes a Counter-Revolution!" at Amazon.com
Donate and Support Freedom Watch at www.FreedomWatchUSA.org 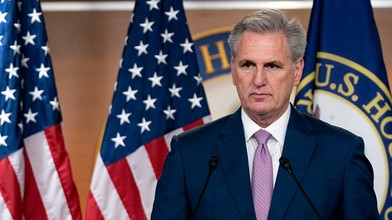 "This is going to get stronger and rougher and what really needs to happen is, Ukraine is not asking for American men and women to fight, all they're asking for is the weapons to defend themselves," McCarthy told Fox News chief Washington correspondent Mike Emanuel on "Fox News Sunday."

"If we would have taken those actions earlier instead of waiting till after Russia invaded, they probably never would've invaded had we done that sooner," he added.