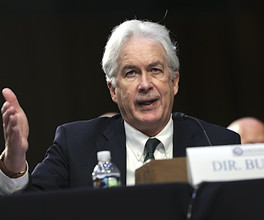 Burns disclosed the information during a speech at Georgia Tech's Sam Nunn School of International Affairs on Thursday.

"By early last fall we and our partners in the U.S. intelligence community had begun to gather disturbing and detailed intelligence about Putin's plans for a major new invasion of Ukraine," he said. "Neither Putin nor many of those around him could imagine Russia as a major power without a deferential Ukraine — a Ukraine whose external choices were controlled by the Kremlin.