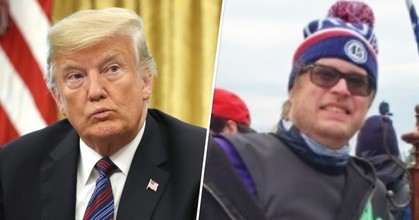 Trump 'authorized' assault on Capitol, Jan. 6 defendant argues at trial
NBC News
April 13, 2022
An attorney for a man who took a coat rack during the Jan. 6 riot argued on Tuesday that former President Donald Trump "authorized" the assault on the building on Jan. 6, 2021, by convincing "vulnerable" people like his client that the election had been stolen.

Dustin Thompson, 38, of Ohio, is the third Jan. 6 defendant to face a trial by jury after the convictions of Guy Reffitt and former police officer Thomas Robertson. Thompson faces six charges, including obstruction of an official proceeding and theft of government property. His co-defendant, Robert Lyon, pleaded guilty last month, admitting that he and Thompson traveled to Washington together and saying stole the coat rack and fled from police when they were confronted on the grounds of the Capitol.