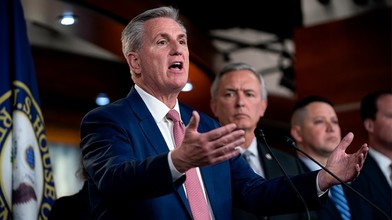 McCarthy vowed that Republicans will focus on "holding this administration accountable" if they win the House majority in the 2022 midterms, and he left the door open to impeachment if they find that laws were broken.

"One thing we learned that the Democrats did is they — they used impeachment for political reason," McCarthy told Fox Business host Maria Bartiromo on Sunday after she asked if he would move to impeach Biden.