KLAYMAN: THE 42 % WHO APPROVE OF BIDEN MUST BE ALMOST AS BRAINDEAD AS HE IS!
Order "It Takes a Counter-Revolution!" at Amazon.com
Donate and Support Freedom Watch at www.FreedomWatchUSA.org 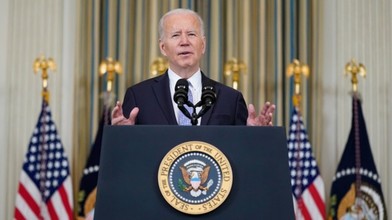 Biden's approval rating ticked down to 42 percent in early April, according to the poll, which CBS News said is its lowest yet. Fifty-eight percent of respondents said they disapprove of the way Biden is handling his job as president.

The president's latest approval rating is down slightly from February and March, when 43 percent said they approved of how Biden was handling his job.