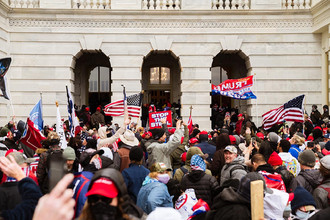 By Josh Gerstein, Kyle Cheney
POLITICO
April 7, 2022
A judge has issued the first outright acquittal of a defendant charged in the Capitol riot.

Following a two-day bench trial in U.S. District Court in Washington, New Mexico engineer Matthew Martin was acquitted Wednesday on four misdemeanor charges by U.S. District Court Judge Trevor McFadden. Martin claimed that he thought the police had allowed him into an entrance near the Capitol Rotunda on Jan. 6, 2021.

McFadden said that, based on video of the scene, that assertion was at least "plausible" and that prosecutors failed to prove the case beyond a reasonable doubt.