KLAYMAN: AS A JEW I AM DISGUSTED BY JEWISH SILENCE! JEWS NO BETTER! AND THE VIRTUAL SILENCE OF THE POPE AND THE CATHOLIC CHURCH IS ALSO A DISGRACE AFTER THE VATICAN'S EFFECTIVE COLLABORATION WITH HITLER IN WW II!
Order "It Takes a Counter-Revolution!" at Amazon.com
Donate and Support Freedom Watch at www.FreedomWatchUSA.org 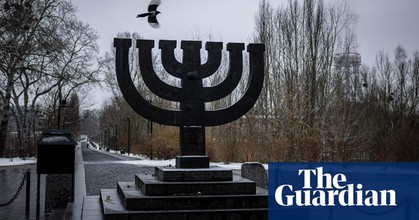 Ukraine president asks Jewish people around world to speak against Russia
By Shaun Walker
the Guardian
April 7, 2022
Ukraine's president, Volodymyr Zelenskiy, has appealed to Jewish people across the world to speak out against the Russian assault on his country, a day after a missile hit close to a Holocaust memorial site in the capital, Kyiv.

The missile strike on Tuesday hit Kyiv's television tower, reportedly killing at least five people. The tower is located close to the memorial site of Babyn Yar, the ravine where Nazi soldiers massacred up to 150,000 people during the second world war, including more than 30,000 Jews, who were shot there in the autumn of 1941 after the Nazi takeover of Kyiv.