KLAYMAN: THE DUKE-UNC GAME SHOULD NOT HAVE BEEN THAT CLOSE IN ANY EVENT: COACH K WHILE A GOOD TEACHER HAS NEVER BEEN A GOOD GAME COACH! AND HE DESTROYED ACADEMIC INTEGRITY AT MY ALMA MATER DUKE WITH "ONE & DONE" NON-STUDENT RINGERS! HE GOT WHAT HE FINALLY DESERVED WITH A CAREER ENDING LOSS TO UNC!
Order "It Takes a Counter-Revolution!" at Amazon.com
Donate and Support Freedom Watch at www.FreedomWatchUSA.org 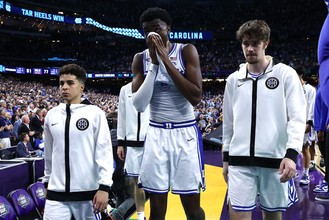 The game was officiated pretty evenly. Both teams had players in foul trouble. North Carolina's Armando Bacot fouled out in the waning moments of the second half. Duke's Mark Williams and Theo John finished the game with four fouls apiece. So, neither coach has much to complain about in that regard.