KLAYMAN: BEFORE CONFIRMATION VOTE ON KATANJI BROWN JACKSON ALL SENATORS SHOULD CERTIFY IF THEY ARE MAN OR WOMAN!
Order "It Takes a Counter-Revolution!" at Amazon.com
Donate and Support Freedom Watch at www.FreedomWatchUSA.org 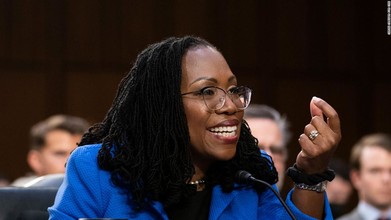 Live updates: Ketanji Brown Jackson's confirmation vote in Senate committee
CNN
April 4, 2022
The Senate Judiciary Committee will vote today on whether to advance the nomination of President Biden's Supreme Court nominee Judge Ketanji Brown Jackson. The committee is currently in a recess and will reconvene later today to vote due to a senator's delayed return to Washington, DC.

An 11-11 tie is expected as no GOP members appear poised to vote for her. Senate Democrats will need to vote to advance the deadlocked nomination to the Senate floor.

If confirmed, Jackson will fill Justice Stephen Breyer's upcoming vacancy and become the first Black woman to serve on the nation's highest court.