KLAYMAN: STONE HAS A THREATENING FOUL MOUTH AND TRUMP WOULD BE WISE TO STAY AWAY FROM HIM PARTICULARLY AFTER STONE TRASHED TRUMP FOR NOT FURTHERING STONE'S ATTEMPTED SALE OF PARDONS!
Order "It Takes a Counter-Revolution!" at Amazon.com
Donate and Support Freedom Watch at www.FreedomWatchUSA.org 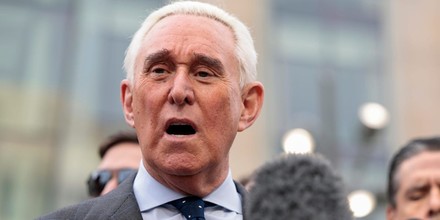 Stone had complained about "radical Islam" in a post.

The app, meant to be a free speech app for conservatives, flagged the post as "Sensitive Content."

Roger Stone, a long-time ally of former President Donald Trump, complained Saturday night about censored content on Trump's own Truth Social app after being slapped with a content warning label following one of his posts.