CAPITOL RIOTER WHO SAID HE 'GENUINELY BELIEVED' THERE WAS A SECRET STATE PLOT TO KILL OFF THE HUMAN POPULATION WAS SENTENCED TO 3 YEARS OF PROBATION
Order "It Takes a Counter-Revolution!" at Amazon.com
Donate and Support Freedom Watch at www.FreedomWatchUSA.org 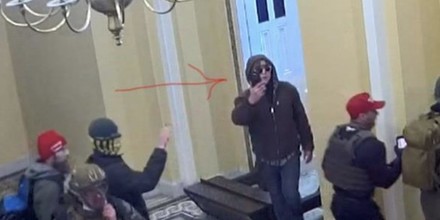 By Erin Snodgrass
Business Insider
April 1, 2022
In court on Wednesday, an attorney for Bruce Wayne Ivey told the judge that his client was prone to "conspiratorial thinking," WUSA reported. Ivey told the courtroom directly that he "genuinely believed" with every fiber of his being that there was a "global secret state that was plotting to kill off the majority of the human population."

Ivey said he sought mental-health treatment two days after participating in the attack and had to spend months recovering from being crushed in a door frame by the mob during the riot.

"I can guarantee the court I won't ever be involved in something like this again," Ivey said, WUSA reported. "I'm taking the steps and doing the work to make sure it won't ever happen."