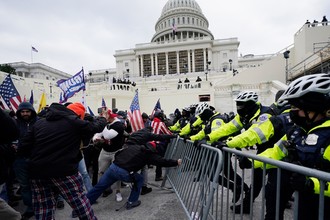 Justice Dept. expands Jan. 6 probe to look at rally prep, financing
Washington Post
March 30, 2022
The criminal investigation into the Jan. 6 attack on the Capitol has expanded to examine the preparations for the rally that preceded the riot, as the Justice Department aims to determine the full extent of any conspiracy to stop Congress from certifying Joe Biden's election victory, according to people familiar with the matter.

In the past two months, a federal grand jury in Washington has issued subpoena requests to some officials in former president Donald Trump's orbit who assisted in planning, funding and executing the Jan. 6 rally, said the people familiar with the matter, who spoke on the condition of anonymity to discuss an ongoing investigation.