KLAYMAN: REGRETTABLY THIS FUNDRAISING PLOY BY TRUMP'S POLITICAL CONSULTANTS WILL GO NOWHERE AS IT WAS ASSIGNED TO A HACK CLINTON JUDGE DONALD MIDDLEBROOKS! AND THIS IS TOO LITTLE AND MUCH TOO LATE AS IT SHOULD HAVE BEEN FILED YEARS AGO!
Order "It Takes a Counter-Revolution!" at Amazon.com
Donate and Support Freedom Watch at www.FreedomWatchUSA.org 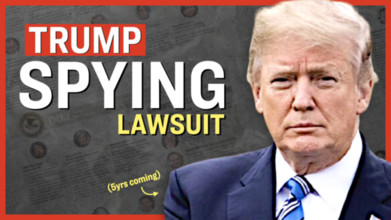 Facts Matter (March 25): Trump Sues Hillary Clinton, DNC, British Spy Over Russian Collusion Allegations Plot
The Epoch Times
March 26, 2022
Former President Donald Trump just officially filed a federal lawsuit against Hillary Clinton, Christopher Steele (who is the former British spy behind that infamous dossier), as well as about 30 other people. And his lawsuit alleges that these individuals carried out a national plot to "weave a false narrative" that Trump somehow colluded with Russia.

Now, of course, that all took place about five years ago. However, with the most recent developments in John Durham's investigation, we now have a clearer picture of what really took place behind the scenes. And perhaps now with this lawsuit, more of the facts will come to light.

Meanwhile, while I was in Florida about two weeks ago, I took the opportunity to sit down and speak with Brady Duke, a former U.S. Navy SEAL, and I asked him—based on his experience in the Middle East—what kind of defense we can expect the Ukrainian civilians to put up against a Russian organized military.