KLAYMAN: EXCELLENT ARTICLE UNMASKS COWARDESS OF BIDEN AND THE SO CALLED WESTERN ALLIANCE!
Order "It Takes a Counter-Revolution!" at Amazon.com
Donate and Support Freedom Watch at www.FreedomWatchUSA.org 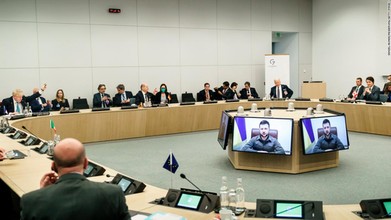 Opinion: One month into war, Zelensky is done with niceties
By Opinion by Michael Bociurkiw
CNN
March 26, 2022
Lviv, Ukraine (CNN)In a grinding war such as the one in Ukraine, one learns how to read subtle changes in the public mood. So it was on Thursday -- one month since Russian forces invaded and just as NATO leaders pledged continued support to Ukraine -- that I spotted outside my apartment windows, on the edges of Lviv's old city, construction workers in high-visibility jackets and tall yellow ladders busily boarding up the neighboring church's magnificent stained glass windows.

It's a scene that's being replayed across this UNESCO world heritage city, from schools to shopfronts and government buildings.

It is also a clear sign that Ukrainians are digging in for the long haul.