KLAYMAN: IF ONLY IT WAS TRUE TO STOP HOLOCAUST IN UKRAINE!
Order "It Takes a Counter-Revolution!" at Amazon.com
Donate and Support Freedom Watch at www.FreedomWatchUSA.org 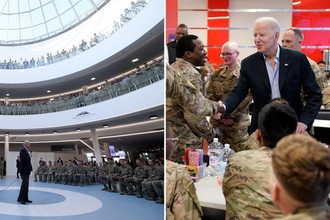 Biden tells US troops they'll be in Ukraine in war gaffe
New York Post
March 25, 2022
President Biden told US troops in Poland that they will witness the bravery of Ukrainian citizens fighting off Russia's invasion "when you're there" — making a significant gaffe after he previously said the US must stay out of the European conflict to avoid triggering "World War III."

Biden made the remark while addressing members of the Army's 82nd Airborne Division after lunching on pizza and posing for selfies with dozens of paratroopers at a mess hall in Rzeszow, southeastern Poland.

"You're going to see when you're there, and some of you have been there, you're gonna see — you're gonna see women, young people standing in the middle in front of a damned tank just saying, 'I'm not leaving, I'm holding my ground,'" Biden said.